Heading into the fall, Summit County’s COVID situation is ‘close to where we want to be,’ health official says | ParkRecord.com
YOUR AD HERE »

As summer winds down, health officials say the state of the pandemic in Summit County is relatively good — the county is approaching targets for case numbers and positivity rates, and the situation here is much better than that in the rest of the state.

But Summit County Health Director Rich Bullough doesn’t paint a completely rosy picture, acknowledging surging cases in neighboring counties and the prospect of another wave of the virus as the weather turns colder, which, coupled with seasonal influenza, could strain hospital resources.

Still, he praised the Summit County community’s response to the pandemic and said it is residents’ and visitors’ willingness to comply with guidelines that is keeping case numbers relatively low. He hoped that would carry over to widespread flu vaccination this fall.

“I think pretty good is a good assessment,” Bullough said Tuesday morning. “As we’ve said many, many times, this is about managing this, and we’ve set some targets that we feel indicate that we’re managing it reasonably well.”

Some of those numbers are: a case positivity rate of 6%, meaning that 6% of Summit County residents tested for COVID-19 have the disease; a rate of 11.2 cases per 100,000 people, a metric used to compare areas with different populations; and four consecutive days of declining new case numbers after a previous six consecutive days of plateau.

Another statistic that Bullough highlighted was the county’s 53 hospitalizations since the pandemic began. He told the Board of Health Monday that there hasn’t been a new COVID-specific hospitalization in five weeks.

“It’s also reflective, unfortunately, of who is driving this pandemic in this moment in Summit County, and that is young people. The young people tend to not end up in hospitals,” Bullough told the board.

He said that’s especially true in the 20- to 24-year-old age group.

“Having been a young male, I don’t know how you change behaviors of young males, but it is a dangerous risk,” he said.

He also told the board that he hadn’t seen many cases tied to bars, fitness centers or schools, a welcome development, if a surprising one.

“I think comparatively we should remain proud in Summit County that we’re keeping this pretty well under control,” he said.

He cautioned, however, against the notion that COVID-19 shouldn’t still be taken seriously.

“This is still a very deadly disease,” he said, estimating that the fatality rate would end up around 1%, 10 times higher than influenza, at 0.1%.

And risks loom on the horizon. As the weather cools and people move increasingly indoors, the virus has a greater chance of spreading. Neighboring Wasatch County is doing well, Bullough said, but Salt Lake County is seeing an uptick in cases. Many people who work in Summit County live in those two counties, he said, and others may live in Utah County, which he said has seen case numbers grow for 21 consecutive days and is driving most of the state’s recent spike.

Much of Utah County does not have restrictions like mandated mask-wearing in public.

In Summit County, the story changes from one end of the county to the other. Most cases, Bullough said, are concentrated in western Summit County.

That’s true in schools, as well.

Bullough said the Health Department was preparing for the winter months and the possibility of mass vaccination campaigns. He said he’d been told Utah would initially receive around 20,000 vaccines, which, if doled out by population, would mean a few hundred vaccines reaching Summit County.

That first wave of vaccines would likely be given to first responders and medical personnel, Bullough said, adding that most of the vaccines that are proceeding through trials require two doses. He estimated that it would be well into next summer before a vaccine might be widely available.

“I believe a year from now, we’re going to be having a much different conversation,” he said.

Bullough stressed the importance of getting a flu shot this fall.

“People need to get their flu vaccine,” he said. “We can’t have two diseases sitting on top of each other that are going to drive hospitalizations at the same time.”

He added that there is a body of evidence that shows being vaccinated against disease when healthy can improve the body’s immune response to other diseases.

“I think we’re close to where we want to be in Summit County,” Bullough said. “The state is not, though, and the nation is not. We are entering — we’ve expected all along a surge in fall and into winter season. We still expect that. The hope is that we’d have this stuff knocked down as we head into these surge seasons. We’re seeing a significant surge (statewide) as we’re heading into a time where we expect it to get worse.” 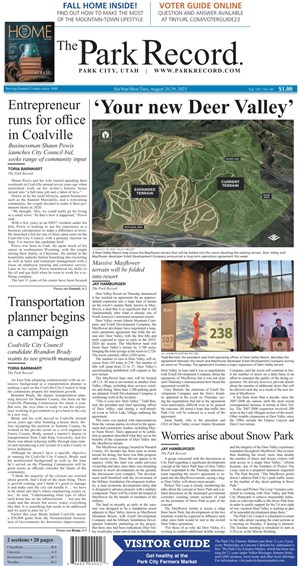